The Alkè electric vehicles easily resolve the typical mobility and utility needs local councils tend to have. Strong and reliable, they have multiple uses. 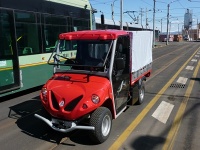 All Alkè vehicles use state of the art electric motor technology; in fact our electric cars have all got a computer on board that control the electric motor in order to optimise use. The separate excitation electric engine has a regenerative system that captures energy from braking that allows an ulterior cut in energy consumption while converting some of the kinetic energy of the vehicle into the battery. Also, these electric cars don’t emit CO2 which makes them perfect for indoor use. The Alkè electric vehicles are also road homologation ready (road approved). An important characteristic is the flexibility of these cars, here are a few examples:

During the summer a council could use Alke' road electric vehicles as:

During the winter a council could use Alke' electric utility vehicles as: 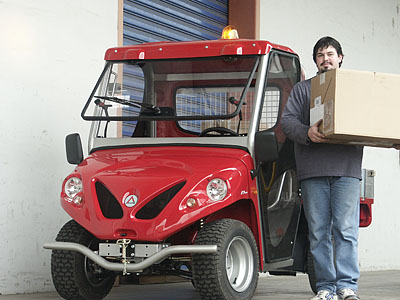 Here are some of the principal characteristics:

These are very small electric utility vehicles, in fact they’re only 127 cm. Large. This allows ATX Alkè vehicles to pass in even the narrowest of streets, to do maintenance on bicycle paths and anywhere normal cars can’t pass.

There are contexts in which an electric van is a necessity and not an option.

In town centers, the delivery of packages and letters is done mainly with bicycles or electric bikes, where even scooters are beginning to get frowned upon because of pollution problems.

In cities the mentality is changing. The huge pollution problems are making the need to use zero emission vehicles a priority, for both people and goods transportation.
Petrol or diesel trucks for postal deliveries can’t circulate in the town center limited traffic zones. So how to resolve the problem?
So there is a need for a road homologated electric truck to transport mail from the sorting office to the town center that must be able to carry a great weight but also pass through the narrowest streets in historic centers or climb the steepest roads to hill or mountain towns.
If there are hard job conditions, then this is the Alkè electric vehicles job. With their 8Kw (with peak power of 14,5Kw) separate excitation electric engines, the UTV are able to carry mail and packages for up to a weight of 600Kg with pendencies up to 35%.
The Alkè electric trucks are used for urban package transport and are suitable for professional use. They are also useful for circulating inside mail warehouses or in structures where maneuvers are complicated and generally in any closed space without the worry of polluting fumes or noise pollution.
Electric Vehicles ATX320E