EVs with snow blade: compact and easy to handle

Alke' snow plow vehicles are the best solution for the winter period and for freezing conditions and heavy snow storms in Northern Countries. With just a few gestures, Alkè ATX vehicle can become a highly efficient snow plow. It allows to clean large and small areas in a very short time.

To face up to the winter period Alkè has also fitted its ATX vehicles with a snow plow blade. These electric snow plows are also used in Northern Countries, where ice and snow are an almost constant presence throughout most of the year. They have enormous capacity, with range reaching up to 150 km. With just a few gestures, the Alkè ATX vehicle can become a highly efficient snow plow. They have many uses: cleaning restrected spaces, including ramps, to company or shopping centers forecourts. Moreover, they have performances comparable to 4x4 vehicles, they can even exceed slopes of 35%, making it a vehicle among the most functional electric vehicles on the market.

The ATX electric vehicle snow plow blade has a width of 1500 mm. It is easily manoeuvrable from inside the cab thanks to a joystick that allows you to lift it, lower it and turn it to the right and left. The snow plow blade rubber edge, which allows scraping, can be replaced and always makes it perfect and able to easily the area affected by snow or ice. Installation can be performed in 5 minute. The Alke' UTV with snow plow blade allows to clean large and small areas covered in ice in a very short time. The ATX vehicles adhere perfectly to the road and allow to prevent dangerous skidding during work operations. For an even more effective removal of ice and snow, the ATX can also be equipped with the electric salt spreader, which has a capacity of 170 litres. It is not a coincidence that Alke' vehicles are the most used by the Civil Protection, municipalities or private companies to solve the difficulties the winter brings.

The most suitable model

The models recommended by Alke' for the use of the snow blade are the ATX 330E/H and the ATX 340E/H, the models with higher performance and ideal for off-road applications even on difficult terrain such as snow and ice. In addition, the 340E/H has greater flexibility in the choice of batteries. The efficiency and quality are guaranteed by high levels of performance, as demonstrated by the work operations in the most difficult situations, exactly like those in the presence of snow and ice. It is not by chance that Alkè vehicles are among the very few electric driven vehicles on the market that can mount a snow plow blade. 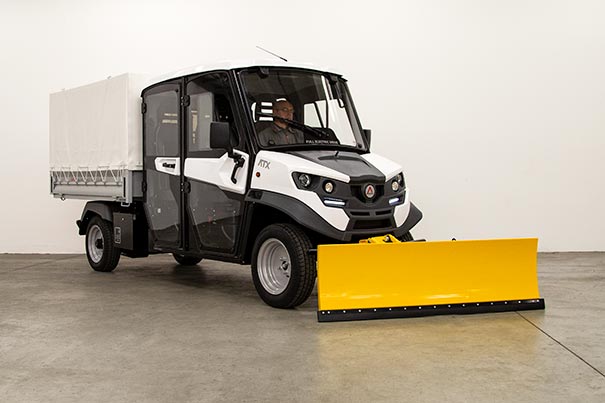 If you would like to know the prices of the Alke' electric snow plow, write a short message.
Sectors