In large private estates see moving an electric vehicle makes the difference, no noise and maximum respect for the environment. 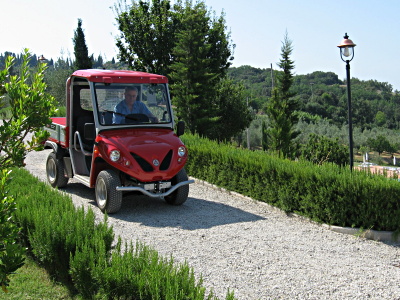 View the embedded image gallery online at:
https://www.alke.com/vehicles-for-large-estates#sigProId8d1b7266db
Seeing Alkè electric vehicles in action in the green areas, almost hidden by trees, with about a thousand years of history is a pleasure for the eyes, the only buzz you hear is the tires on the digging up roads.  In Italy there are many facilities that attract tourists from all around the world. When tourists arrive in our facilities expect a special treatment, in this field you will include Alkè electric vehicles, vehicles for work top for quality and performances in total silence.  Move for several kilometers on both gravel and digging up roads with demanding ups and downs (this is also a point that should not be underestimated) transporting goods and people, this is the job for which Alkè electric vehicles were designed.
Alkè electric vehicles are especially suitable in the large estates both in countryside and hill because they are able to face up to 30% slopes. They are equipped with an electronic motor brake that works when you start to go downhill reducing the speed without consuming the brakes. During descent electric vehicles recover energyand recharge the batteries. Alkè vehicles are excellent for the maintenance work and are also able to tow up to 3000kg.  The charging of these vehicles is extremely simple, simply attach the plug to a simple electrical outlet (like you see in the 5th photo) because the charger is on the machine.  Alke electric vehicles are often used in structures where tourists wish to spend a relaxing holiday in contact with nature and want to move in an ecological way, dipped in absolute quiet in the green of olive groves and vineyards.  In private areas Alkè electric vehicles are also arranged for the transportation of people and are then used both for transporting people with luggage and for excursions in full respect of nature.
Sectors