Alke' has developed a series of electric vehicles for use in tunnels and passageways: this solution has been specifically designed for the bimodal transport of materials, workers/people, emergency services, surveillance and maintenance work both on road and on rail in areas where compact, flexible and non-polluting vehicles are needed.

The rail system module configuration has been developed by Alke' to allow electric vehicles in the ATX range to operate on both road and rail, offering maximum flexibility and speed when moving from road to rail and vice versa.
The module consists of hydraulic arms that lift, lower and move the ATX zero-emissions vehicle forward on the rails. The module is activated by pressing a switch on the dashboard central console. In addition to the hydraulic arms, it also has front and rear auxiliary LED headlights and four attachments for lifting/lowering the vehicle in underground
The rail system module can be combined with most of the Alke' options including: a loading bed, closed box, first aid module, openable tarp, box behind cab with bed with drop sides, etc.

Alkè electric vehicles for tunnels are perfectly suited for work on road and rail. With their rail system module, ATX vehicles can reach places that are hard to access, with limited visibility and environmental restrictions, such as tunnels (both road and railway), shafts, underground railway tunnels, etc. These road-rail vehicles are ideal for work that requires compact, high performing, zero-emissions vehicles such as:

The electric vehicles in the ATX range can operate in any situation, including extremely demanding ones, and are very high performing, strong and sustainable thanks to the technology, solutions adopted in the off-road sector and innovative materials used to make them.
These vehicles have high autonomy (up to 150 km, depending on the battery installed on the vehicle) and due to solutions including the use of a rapid recharging system for lithium batteries or multiple batteries that can be quickly replaced, they can offer non-stop operating for uninterrupted work shifts.

For vehicles to be used in tunnels, Alkè recommends the following models:

For vehicles to be used in tunnels, Alkè recommends the following models:

Based on the ATX models, Alkè also manufactures special, fully electric double cab vehicles with two driving directions for use in tunnels and passageways (both road and rail) and in small ducts which are also available in bimodal (road-rail) and explosion-proof versions. 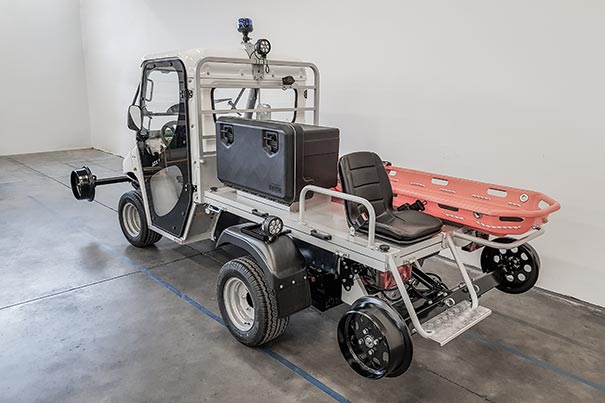