Alke' Vehicles to the royal palace in Copenhagen

ALKE' electrical vehicles in service at the Royal Palace in Copenhagen: Alkè vehicles silently performing their duties on the grounds of the prestigious royal household. 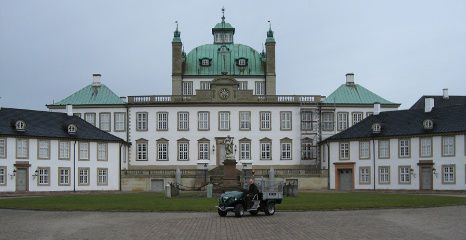 ALKE' at the Royal Palace in Copenhagen
ALKE' VEHICLES AND HISTORY: Alkè electrical vehicles are often used in interesting historical contexts, places where the highest respect must be given to the lawn below, as well as to the silence that reigns in these important compounds. Alkè electrical vehicles are gradually taking the place of the old petrol-run vehicles – their performance is equally efficient (sometimes even more so) and they do not release any pollutants into the air.
The electrical vehicle you see at work on the grounds of the Royal Palace in Copenhagen have been given a customised paint job to blend into the context in which it is used. The vehicle has been equipped with a load bed and drop sides. The model in question is an ATX 200E with a separate excitation electrical motor with a power peak of 17.5 kW, a maximum speed of 30 km/h and some 70 km of range. This particular vehicle is ideal for maintenance jobs and transporting bulk items from one place to another. Alkè electrical vehicles can also be used indoors as they release no pollutants.
View the embedded image gallery online at:
https://www.alke.com/alke-vehicles-royal-palace-copenhagen#sigProIde49a9f4755
(click to enlarge)
Thanks to the electronic battery charger, the vehicle can be recharged at any time by simply connecting it to any electrical outlet – if the vehicle has been used all morning, for example, the lunch break can be taken advantage of to top off the charge and thus increase the vehicle’s range. If the vehicle is to be used intensively, the operator can take along a spare battery pack which can be changed in just 5 minutes.
Ask us about the prices of transport and maintenance vehicles:
Electric Vehicles ATX320E