Prague moves in an eco-friendly way with electric cars and chooses an electric vehicle ATX that has been made available to the Prague's Forestry authority. 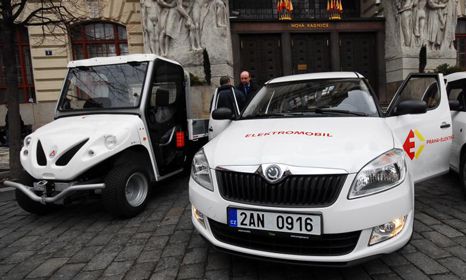 The Alke electric vehicle for the ‘Prague in electromobile’ project
Prague councillor Radek Lohynský gave three electric cars and an Alke ATX to four Prague-based organisations.
Just last year, as part of the pilot project they covered 30,000 kilometres, which means that five tonnes of carbon dioxide were not released into the atmosphere. As part of the 'Prague in electromobile' project, the four new electric vehicles will be used by four organisations set up by Prague's Council.
The 'Prague in electromobile' project was launched with the aim of studying the use of electric vehicles. It revealed that alternative and clean transport has a financial potential. As they covered the 30,000 kilometres they saved 125,000 crowns (5000 euros, more or less) compared with a vehicle with a combustion engine.
At the moment the Council is using an electric vehicle and the other four are used by the COPTH Poděbradská secondary school in the Prague 9 district, the head office of the Children and Youth centre and its branch in the Prague 8 district and the Praha 4-Háje retirement home. The Alke' ATX200E electric economy car was made available to Prague's Forestry authority. The project coordinator from the Ministry of the Environment said that the project was completed, but they will be seeking other options for environmentally-friendly traffic as part of another project, ‘Clean motoring’.
The electric vehicle ATX will be used in the Stromovka park to collect leaves and organic waste. This vehicle is able to load 500-600 kg on the loading bed and tow 2000 kg without problems. Width is only 127cm, this allows to operate in narrow areas or in places where there are many obstacles, as the trees can be.
Ask us about the prices of Alke' vehicles:
Electric Vehicles ATX320E