Which are the advantages of electric cars?

The advantages of electric cars or electric vehicles – as opposed to vehicles with a traditional combustion engine – can be seen from both a technical and financial perspective, without sacrificing performance. Let's take a better look.

Electric vehicles are simpler, more silent and cleaner to operate compared to vehicles with combustion engines, which means less maintenance and therefore lower costs.
Electric vehicles are preferable to traditional combustion engines for activities that have to stop&go frequently. They are subject to less stress in such situations, since they don't have a clutch, which can break when starting up repeatedly, and the transmission is very basic. In addition, electric vehicles recover energy while braking, which recharges the battery.
Electric vehicles don't produce noise or CO2, and this makes for a healthier work environment; furthermore, they can be used in closed environments with no problems.
The savings in terms of costs are quite significant. Just think, €3 is enough to travel 100 km, and the cost of taxes and insurance is lower than for a vehicle with a combustion engine.

The technical lifespan, i.e. the work hours obtained from an electric vehicle, is at least twice, if not three times, that of a traditional combustion engine, due to the lack of parts that are subject to wear.
Electric vehicles can travel in limited traffic zones with no restriction.
If special equipment powered by electricity needs to be installed on fuel cell vehicles, the vehicle's own batteries can be used without needing to install a special battery set.
No unusual or complex infrastructure is needed. Alkè commercial vehicles, for example, have a battery charge set on board and can be charged using a legally compliant power socket with a capacity of at least 16A - 230V.

To further reduce CO2 emissions and costs, they can be used in synergy with photovoltaic systems or other renewable energy sources.
The use of a vehicle with zero emissions sends a clear message of care and respect for the environment.
More specifically, explosion-proof Alkè electric cars are also available and can operate in high-risk areas that are not accessible with other of vehicles.
Despite being electric, Alkè vehicles are also suitable for off-the-road driving and offer performance levels comparable to 4x4 vehicles in the same category.

Advantages of electric mobility for environment

Nowadays there are different solutions to try to pollute less, the use of electric vehicles is one of them and ,view the current state of technology, it is also the most reliable. These vehicles are solving the problem of pollution especially in historic centers, in limited traffic areas and in general in those places where there is a high concentration of vehicles in narrow spaces. An important thing is how we produce the electricity. If we produce electricity with traditional systems, the pollution is reduced to 37% compared to that produced by a petrol or diesel vehicle. The ideal solution would be to produce electricity cleanly, for example with solar photovoltaic panels, and then use that energy with electric vehicles. 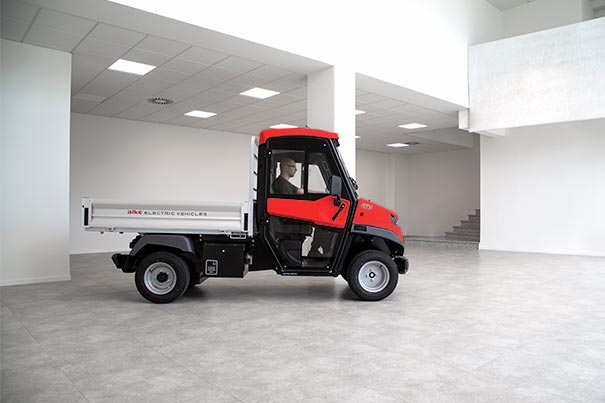